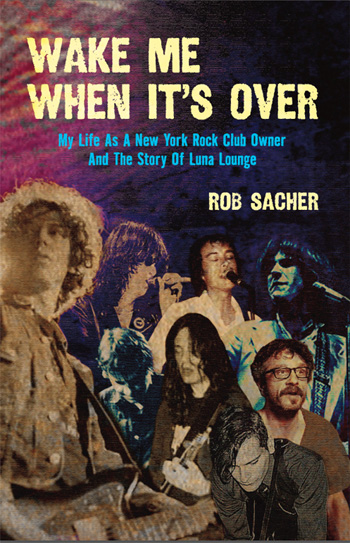 I grew up in Brooklyn. Raised on the girl groups, I discovered The Beatles on the first day their first single was radio played in New York. Rocked at the age of eleven when I first heard an electric twelve string guitar, it was then that I knew that I would be a musician, spend my time around music, and live my life among friends who played and made music too.

This is my story, I am a musician and entrepreneur who created and co-owned nightclubs, now part of the history of music and nightlife in New York City. Starting with my first club, Sanctuary, and continuing with Mission in Manhattan’s East Village and ending with the highly regarded Luna Lounge, this is the first book to cover a part of the New York rock music scene that came after punk, new wave, and no wave.

Set in the East Village of the late 1980s, musicians and bands including Joey Ramone, The Psychedelic Furs, The Jesus And Mary Chain, Ministry, Nine Inch Nails, The Sisters of Mercy, The Sugarcubes, and Killing Joke would meet and party together at Mission. From the late 1980s through 1993,  it was the time of M-TV’s 120 Minutes, melodic British psychedelic guitar rock, Wax Trax industrial rock records, a dangerous but exciting Lower East Side, and a scene of its own among friends.

Moving further ahead, my story continues with the sale of Mission and the opening of Luna Lounge in 1995. Possibly the most important venue of its size in New York, Luna was the stage where The Strokes, Interpol, The National, Longwave, stellastarr*, Lotion, The Bravery, The Hold Steady, French Kicks, and Nada Surf would first perform before friends and early fans of the bands. Luna would also host free performances by Marty Willson-Piper (The Church), Black Box Recorder, Sonic Boom, and Kid Rock.

This is also a narrative about Elliott Smith as he wrote out his work for the album, XO, while sitting at the Luna Lounge bar, and his subsequent launch into stardom.

Finally, this is the story of the forced closure of Luna Lounge, a victim of the rising real estate values which came as a result of the quality of life initiatives set out by the Republican mayors who controlled the city for almost twenty years.

More than what I have done, this is a story of what I have learned about life over these fifty-plus years; what is important and what can truly be left behind. If you are an artist, a musician, a fan, or have a desire to connect among friends, please order your copy of Wake Me When It’s Over.