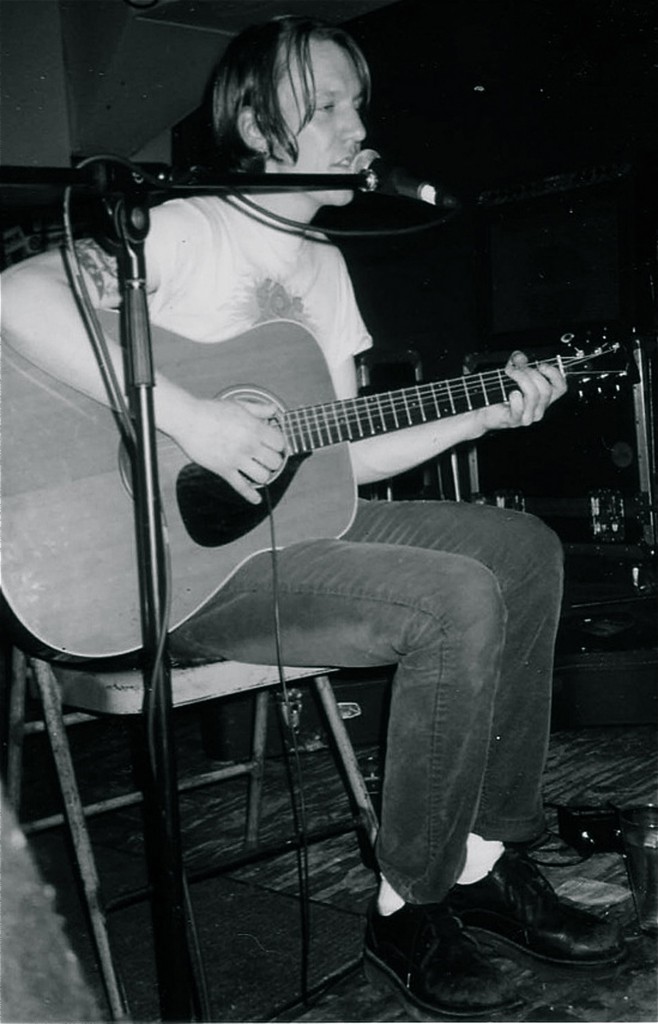 I first met Elliott Smith when he started coming into Luna Lounge in winter, around the beginning of 1997. Luna’s bar was shaped like the letter ‘L’, with the small part of the ‘L’ coming out from the wall closest to the front door. Elliott would often sit at the small part of the ‘L’, at the bar. He was a solitary figure and I had no idea of who he was or what he had already done. Every night he would sit alone, filling page after page in his book. He was not yet a star in New York.

He had a couple of albums recorded and a bit of a following too, but leaving his world back in Portland for a place where he wanted to write, Elliott traded in a town that he knew for a place where he had not yet arrived. Just another musician making his way through the Lower East Side, it was still most of a year before his music appeared in the film, Good Will Hunting, and the newfound fame that would come from his Academy Award nomination.

After a few months, on one particular night, having just completed something giving him pause for a smile, Elliott glanced up from his book to find me looking for something behind the bar. By now he had seen me in Luna dozens of times but to each other we had not yet spoken. I used to think to myself,

“That man is very far into his jar and the lid’s on tight.” But, on this night, there was a brief opening and I took a chance and sought to make an entrance into his world. I said,

“Nice day, today. I think it’s getting warmer.” He thought about it for a moment and then with a slight smile replied,

“Yeah, it was nice today.” I smiled back at him and walked out from behind the bar. On my way home I thought to myself that he seemed like an interesting guy. But, I still had no idea who was this solitary man.

Elliott Smith and I had broken the ice, but he continued to bring his notebook into the club and I would not disturb him when he would write. But, it was almost spring in New York and like the new thaw coming; he was slowly warming up in the world in which he now lived.

Elliott had made great use of his freedom while writing his new album at Luna. By April, it seemed like his work was complete. I got the feeling that Elliott had escaped from his people in Portland. His feelings expressed, he seemed a little bit lighter now, having set down what he had set out to say.

We two knew of sadness, both winners and losers the same, but he was driven by something inside which was bringing him anger and pain. Sometimes we would talk about life, and how love could abandon us all, pursuing a notion of happiness and chasing a beckoning call. We never spoke of his music.

This is a teaser. If you would like to know more about the time that he spent in Luna Lounge, please order your copy of Wake Me When It's Over.  It's not available in stores, this is my website and although you can find my book where books are sold on the web, the price here, just $15 for soft cover (plus shipping) or $7 for digital, is much less than anywhere else in the world.